From antiquity to the present

The refurbishment of the Packhorse has provided a wonderful opportunity to examine the history of this very special building. For many years it was assumed that the Packhorse was constructed in or around 1674, as per the date above the door. Some of the building’s features, however, suggest a possible earlier date, but nothing had ever been proven. 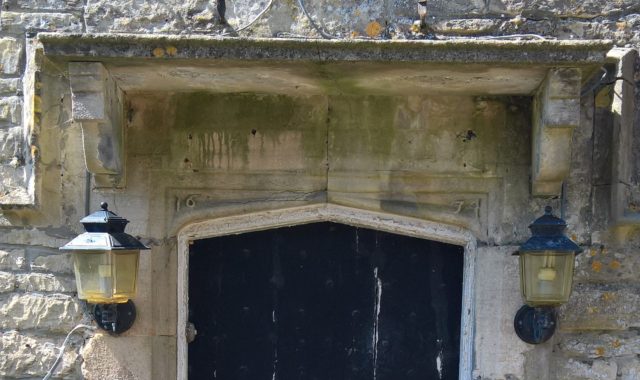 During the recent renovations, an old pub sign was discovered, claiming that the Packhorse is ‘fifteenth century’. Perhaps this is marketing gimmickry, but it does tend to suggest that not everyone believed the obvious date carved in stone above the door. Certainly, there has always been speculation in South Stoke village as to when the Packhorse was constructed, with locals telling tales of ‘secret passageways in the cellar’, leading to the Church and/or the Priory.[1] The Tap Room, or north bar, has a door to the right of the inglenook fireplace and once had another to the left (now blocked up). Suggestions of secret priest holes led some to believe that the pub must have been constructed prior to the mid-sixteenth century, when Henry VIII passed the first Act of Supremacy and created the Church of England. Taking this date and subtracting a hundred years for good measure does indeed give us the fifteenth century date as claimed. But it’s hardly scientific.

In 2012, with the closure of the Packhorse, retired professor Bob Parfitt along with his wife Judith – both active members of the South Stoke history group – decided to settle the question once and for all. The resulting endeavour took the next five years to complete. It was only after much careful and dedicated research that the history of the Packhorse began to be revealed.

The team’s early research resulted in the discovery of a Packhorse Inn and farm, but as the investigation continued it became apparent that this property was actually located on the Old Midford Road, approximately a mile away from the Packhorse we know and love. Bob and Judith switched gears, hypothesising that the Packhorse Inn in South Stoke, which they knew had existed from 1850 onwards as a public house, could have been known by a different name. Utilising Parish archives and national tax records, they were able to trace the sale of a prestigious property on Old School Hill in 1716. Parish rates showed that the building had been owned by a different family as early as 1702 and with further research Bob and Judith were able to find a will dated to 1667 which described three relevant properties, one of which was referred to as ‘the Mansion House’. Delving into the churchwarden’s accounts revealed that another property in the locality known as Hazlewoods House was undergoing extensive renovations between 1672 and 1675, congruent with the date above the Packhorse door. In a moment of inspiration, the team realised that the three properties – the Mansion House, Hazlewoods House and the Packhorse Inn – might in fact be one and the same! It was a sensible deduction, but what was needed was hard evidence of construction taking place pre-1674. Unfortunately, at this point in the investigation, the Packhorse was in private hands and not accessible for research.

Bob and Judith considered that Hazlewoods House – the original name of the Packhorse building – might have been built as a Church House. Certainly the location was right, with the building being constructed to the south-east of the church. Their research indicated that prior to The Reformation in the early 17thcentury, the church nave would have functioned as the village hall, and was a social space used for recreational purposes, especially during festivals when much drunkenness and debauchery ensued. Post-Reformation, many bishops became sniffy at such behaviour, and following the national trend, South Stoke church would have become entirely devoted to worship, leaving the locals with nowhere to throw a party. This is where Church Houses enter into the picture, providing a place where community festivities might take place, away from the ever watchful eye of the clergy. They are a feature of the South West and the theory that the Packhorse was once a social venue remained the leading theory until late 2016, when the building finally returned to the community. The history team were now able to enter the pub, and with the assistance of numerous specialists, apply scientific principle to their hypotheses. 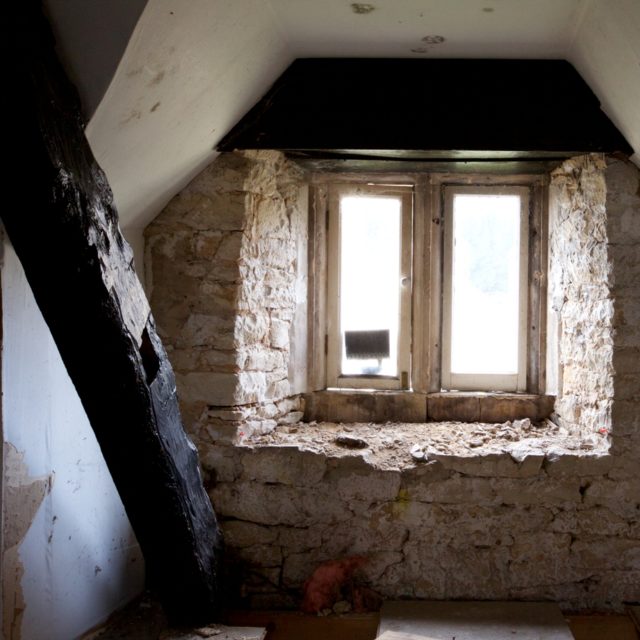 (left of picture) Roof timbers of the type sampled

Two of the most important dates in the Packhorse story have come from the use of dendrochronology (the dating of events by studying the annual rings of trees). Samples were taken from the oldest beams and, after a tense period of waiting, it was revealed that the timbers were from 1618 and 1635. Furthermore, during internal renovations in 2017, evidence of a thatched roof was discovered. With a little more digging into the history books, it was now possible to complete the picture.

In the late Elizabethan period, 1560 onwards, there was an upsurge in the building of ale houses across Britain. The ale house was the new ‘big thing’ – think of it as the crypto-currency of its day. Some Church Houses were converted to ale houses, others were constructed from scratch, with the ale house providing a similar service to the modern day pub. The build date of 1618 fits in with this social phenomena, with later alterations taking place in 1635. The style of the ground floor mullions and doors also supports this date of construction. Hazlewoods House would originally have been a two storey building with a thatched roof, with the top floor being adapted to provide accommodation in 1674. Parish records suggest it may well have been used as a poor house around this period. It was probably then used as a residence during the 18th century. The earliest record of its pub status comes from 1847 when it was described as a ‘beer house’, a function it retained until its closure in 2012.

Now, in 2018, the Packhorse reopens its doors – on the 400th anniversary of its inauguration as an ale house. Whether it was a Church House before that will continue to be hotly debated by locals and historians, over a friendly pint. One thing is certain: it was at the centre of village life when it was built and it will now resume that role, becoming the centre of the village once again. We’re immensely proud of our pub and in keeping with its heritage, we welcome you in with open arms.

One story which hasn’t been explored is that of the passage through the ground floor, which enabled coffins to be carried through the pub on their way to the church. Is this really true? Come in, have a beer and ask a local. Even better – ask two. Everyone has their own theory and a different tale to tell. 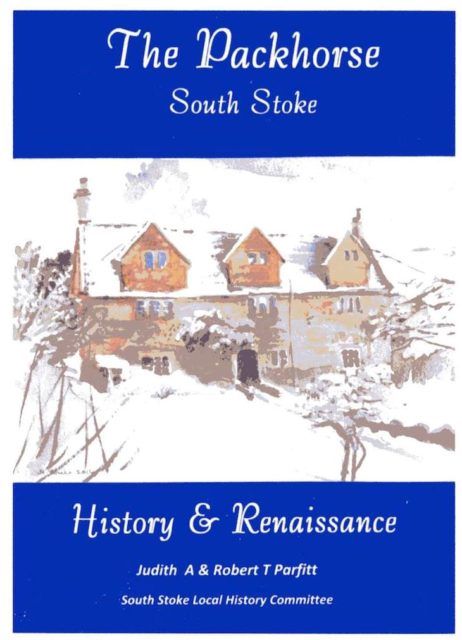 If you’d like to purchase a copy of Bob and Judy’s book The Packhorse, South Stoke – History and Renaissance (the source material for this article) please enquire at the bar.

[1] Brian Perkins, who was born in the Packhorse in the 1930s, remembers the discovery of a buried stone slab several feet beneath the floor of the Tap Room alcove. It was later reburied without further investigation.

The Packhorse – as remembered by Brian Perkins >> 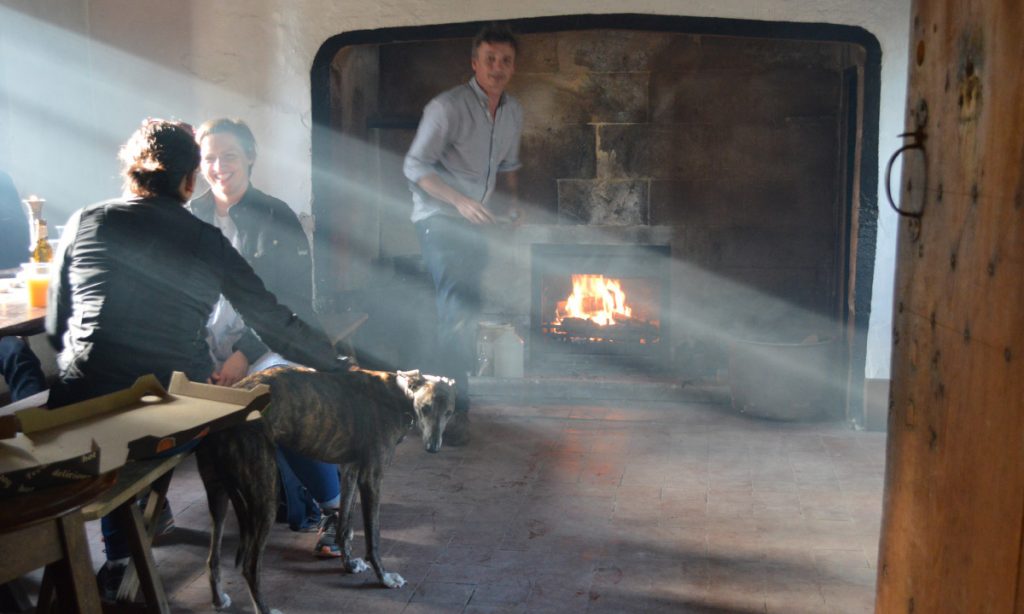 Anon writes: My guilty confession is that while the Packhorse was closed, I became convinced it was rotting away from the inside, as many broken windows had not been replaced. One day while out walking, I met a neighbour who voiced similar fears. I slipped inside the pub through an open downstairs window while my accomplice and dog kept watch. I was able to investigate the state of the bar and rooms, and take photos for posterity, thus confirming that all was not lost. A rumour had been doing the rounds for some time that the last landlord had left behind some beer when the Packhorse closed. Unhappily, I was able to confirm that this was not the case and the pub was as dry as a fisherman’s sock in particularly large waders.