With a huge thanks to Jenny J for passing this to us, we have just become aware of a fascinating story involving the Packhorse Pub some 90 years ago (1932).

Jenny found some old newspaper clippings which started with the following: 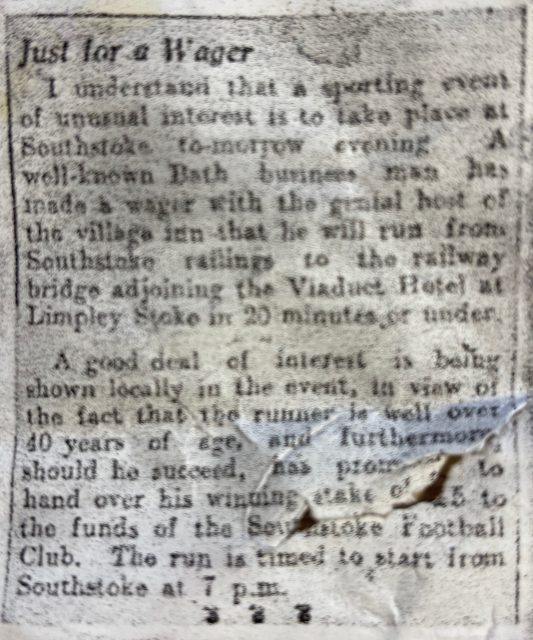 Just for a Wager

I understand that a sporting event of unusual interest is to take place at South Stoke tomorrow evening. A well-known bath businessman has made a wager with the genial host of the village inn that he will run from South Stoke railings to the railway bridge join in the Viaduct Hotel at Limpley Stoke in twenty minutes or under.

A good deal of interest has been shown locally in the event, in view of the fact that the runner is well over 40 years of age and furthermore, should he succeed, he has promised to handover is winning stake of £5 to the funds of the South Stoke Football Club. The run is timed to start from South Stoke at 7 pm. 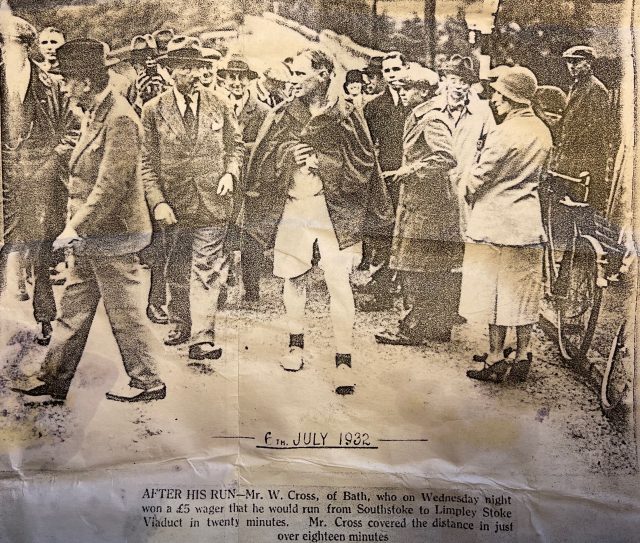 A 41-year-old Bath man won a £5 bet that he would run from South Stoke village to the railway bridge near the Viaduct Hotel in 20 minutes or under.

The runner was Mr. Wilfred Cross of Bath and his time was 18 minutes 21.5 seconds. A large crowd was present when, at the crack of a pistol, Mr Cross started off with two pacemakers, Mr. H.S. Pryce, his trainer and Mr Pryce’s young son.

A still larger crowd leaned over the parapet and saw Mr Cross coming along the railway line and arrived at the small tunnel to win his bet.

Mr F. Rose the landlord, the landlord of the Packhorse In, South Stoke, with whom the wager was made was waiting on the line, and was the first to congratulate Mr Cross on winning the “fiver” from him.

Mr Cross came in well, but when a pistol shot announced that the run was over, he flopped down on the line and lay for a few minutes to recover.

His route was South Stoke, Midford Road, halfway down the old hill, across Major Hepworth‘s Park, out into Tucking Mill Lane, to the Tucking Mill and then along the railway line.

The winners were given to the South Stoke Football Club.

Mr H.S. Bottrill was the timekeeper, and Mr Arthur Wyatt acted as a starter. The course is about three miles of very uneven country.

Are you thinking what we are thinking?

Do we try and re-create this exactly ninety years to the day – coincidentally also a Wednesday (06 July 2022)?

So many other questions spring from this …

All back to the Packhorse after to discuss the results?

With huge thanks to Tim L for indicative (current day) route map noting that:

(1) the exact route used is not totally viable – as the railway line between Midford and the viaduct is built over in a number of locations.

(2) We think the reference to Major Hepworth’s Park is Midford Castle – we will chat to the current owner to see if this cut across is still viable.

(3) The finish should be under the viaduct on the traffic-free cycle path below the main road. The OS app makes it 4.5 km – slightly over 2.5 miles.

This story keeps getting better. With a huge thanks to Jane H, it transpires that Mr Wilfred Cross was a WW1 hero also.